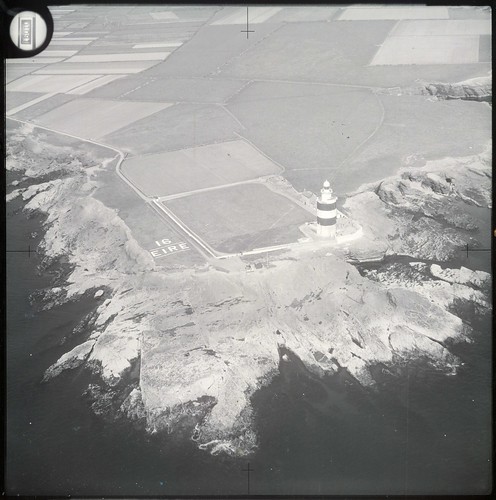 Visitors to the lighthouse may have taken a quick stroll to the end of the road and wondered what the concrete slabs were once used for.

These are the remnants of the WW2 Lookout station used for keeping an eye on the ships ensuring they passed the area in safety. The raised slab with the steps up to it was the ammo store for the fog horn.

When the lighthouse foghorn was taken out of service in 2011 it was an electric horn but before that it was operated by compressed air. Previous to that it was rockets or explosive charges set off from an extendable arm at the top of the tower. Finally or firstly, the reason there was an ammo store, the warning signal given during fog for decades was by means of a cannon located between the ammo shed and the lookout station. This was fired once every 10 minutes.

The lookout station was one of 83 around the country in use from September 1939 to June 1945. They were manned by members of the Local Defence Force. The watched for military activity which was recorded in a log book and reported by phone.

Accompanying these stations were large signs made of whitewashed rocks indicating the station number and the word “Eire” to denote neutral Ireland. This can be seen in the old aerial photograph courtesy of the Irish Defence Forces Archive’s Flickr. And for those budding historians one of the log books is available through this map.

Knights Templar at Templetown
13th June 2019
Go to Top
We use cookies on our website to collect anonymised, basic analytics for site improvement purposes. By clicking “Accept”, you consent to the use of ALL the cookies.
Cookie settingsACCEPT
Manage consent

This website uses cookies to improve your experience while you navigate through the website. Out of these, the cookies that are categorized as necessary are stored on your browser as they are essential for the working of basic functionalities of the website. We also use third-party cookies that help us analyze and understand how you use this website. These cookies will be stored in your browser only with your consent. You also have the option to opt-out of these cookies. But opting out of some of these cookies may affect your browsing experience.
Necessary Always Enabled
Necessary cookies are absolutely essential for the website to function properly. These cookies ensure basic functionalities and security features of the website, anonymously.
Functional
Functional cookies help to perform certain functionalities like sharing the content of the website on social media platforms, collect feedbacks, and other third-party features.
Performance
Performance cookies are used to understand and analyze the key performance indexes of the website which helps in delivering a better user experience for the visitors.
Analytics
Analytical cookies are used to understand how visitors interact with the website. These cookies help provide information on metrics the number of visitors, bounce rate, traffic source, etc.
Advertisement
Advertisement cookies are used to provide visitors with relevant ads and marketing campaigns. These cookies track visitors across websites and collect information to provide customized ads.
Others
Other uncategorized cookies are those that are being analyzed and have not been classified into a category as yet.
SAVE & ACCEPT
Powered by